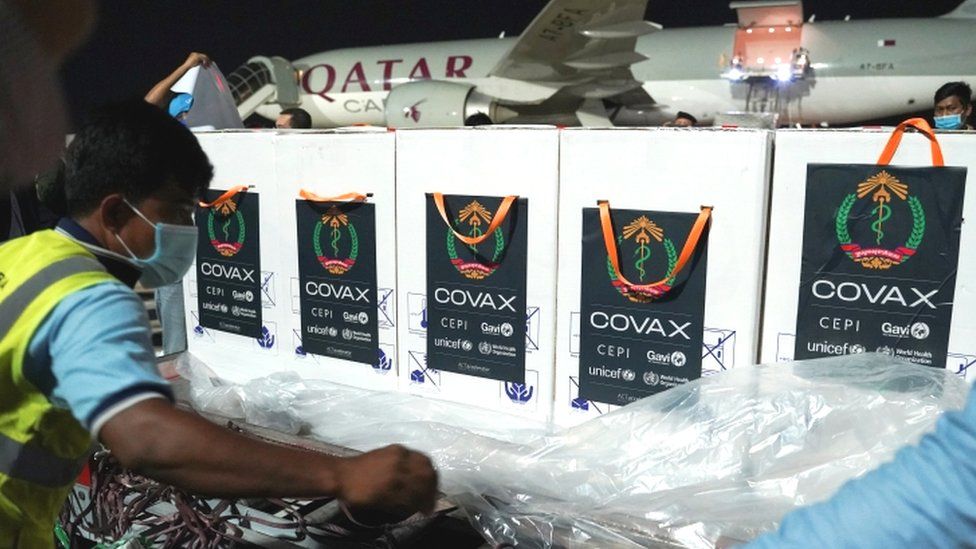 The World Health Organization (WHO) has criticised what it describes as a "shocking imbalance" in the distribution of coronavirus vaccines between rich and poor countries.

The group's chief said a target of seeing vaccination programmes under way in every country by Saturday would be missed.

The WHO has long called for fairer distribution of Covid-19 vaccines.

It is leading the Covax scheme which is designed to get jabs to poorer nations.

So far, more than 38 million doses have been delivered to around 100 countries under the scheme.

Covax hopes to deliver more than two billion doses to people in 190 countries in less than a year. In particular, it wants to ensure that 92 poorer countries will receive access to vaccines at the same time as wealthier countries.

What did the WHO say?

"There remains a shocking imbalance in the global distribution of vaccines," WHO Director General Tedros Adhanom Ghebreyesus told a news conference on Friday.

The Covax scheme had been expected to distribute at least 100 million doses worldwide by the end of March, but only 38 million jabs have been delivered so far.

"We hope to be able to catch up during April and May," Dr Tedros said.

He also criticised countries that have sought their own vaccine deals outside of the Covax scheme. "Some countries and companies plan to do their own bilateral vaccine donations, bypassing Covax for their own political or commercial reasons," Dr Tedros said.

"These bilateral arrangements run the risk of fanning the flames of vaccine inequity," he added. "Scarcity of supply is driving vaccine nationalism."

Earlier this year, Dr Tedros warned that the world was facing a "catastrophic moral failure" over vaccine inequality. He said a "me-first" approach would be self-defeating because it would encourage hoarding and prolong the pandemic.

So how fair is the vaccine situation?

Vaccines produced in the UK, US, Europe, Russia and China are already being widely used, having been bought up and approved in countries around the world.

But doses have not been shared equally between countries.