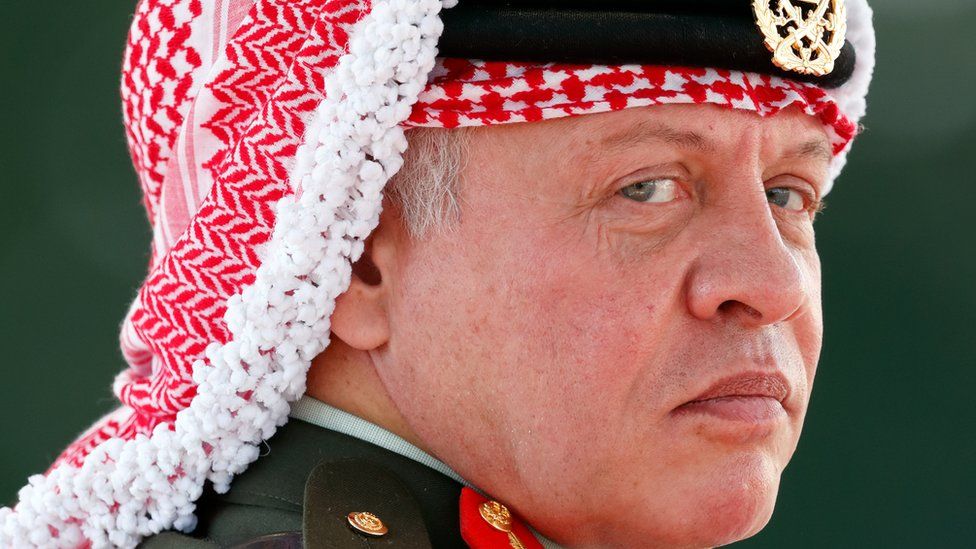 Jordan and its ruling royal family have long been seen by foreign allies as beacons of stability in the Middle East.

But last week, an unprecedented dispute within Jordan's monarchy threatened to dispel that image.

In an extraordinary move, Jordanian authorities accused Prince Hamzah bin Hussein – the half-brother of the country's king – of plotting against the throne.

The prince said he had been placed under house arrest, but tensions appeared to ease after the senior royal pledged his loyalty to the king in a letter.

The saga has brought Jordan's royals to global attention. So, who are they, and who else was involved in this high-stakes family drama?

Let's start at the top of the family tree. It is there that King Abdullah has sat since February 1999, when he succeeded his father, King Hussein bin Talal.

They're both members of the Hashemite dynasty, the royal family of Jordan since 1921.

Before he ascended to the throne, King Abdullah studied at Oxford University in the UK and, in the 1980s and 1990s, held some of the most senior roles in the Royal Jordanian Army.

King Abdullah seemed destined to spend his life in the military, until something rather surprising happened.

In January 1999, King Abdullah was appointed heir apparent, weeks before his father's death.

This was a major snub to his uncle, Prince Hasan Bin-Talal, who had held the post – known as the crown prince – since 1965 but faced criticism before he was replaced.

The nature of the succession would foreshadow royal reshuffles to come.

While Jordan is nominally governed by elected officials, King Abdullah has extensive executive powers, including the ability to block laws.

Against this backdrop, King Abdullah has faced demands for political reform, especially in the wake of the popular uprisings across the Arab world in 2011.

In response to those protests, King Abdullah attempted to enact political change, but critics feel his reforms have not gone far enough.

Now we turn to the royal at the heart of the present family drama, Prince Hamzah.

Born in March 1980, Prince Hamzah is the oldest son of the late King Hussein and his fourth wife, American-born Queen Noor.

Prince Hamzah is a graduate of the UK's Harrow School and the Royal Military Academy at Sandhurst. He also attended Harvard University in the US and has served in the Jordanian armed forces.

He was named crown prince of Jordan in 1999 and was a favourite of King Hussein, who often described him in public as the "delight of my eye". However, he was seen as too young and inexperienced to be named successor at the time of King Hussein's death.

Instead his older half-brother, King Abdullah, ascended the throne and stripped Hamzah of the title of crown prince in 2004, giving it to his own son.

On 29 November 2004, Prince Hamzah replied to the king's decision with a letter, reading: "I obey the command of my elder brother out of my loyalty, love and obedience. I promise you that I shall always be up to your expectations and confidence in me as a Hashemite Muslim."

The move to replace Prince Hamzah, 41, was seen as a blow to Queen Noor, who had hoped to see her eldest son become king.

Since then, tensions within the royal household have reportedly been present for some time.

Queen Noor al-Hussein was said to be the favourite wife of the late King Hussein.

A Syrian-American, Queen Noor was born Lisa Najeeb Halaby in Washington DC, where her father worked as a government official.

She worked in urban planning in the US, Australia and Iran, before meeting King Hussein in the 1970s.

After a largely secret courtship, the pair married in 1978. Known for her philanthropic work, Queen Noor remained King Hussein's consort until his death.

The couple had four children, including their oldest, Prince Hamzah.

As news of the royal ruckus involving her oldest son emerged, Queen Noor, now 69, weighed in on Twitter.

Queen Noor is known for her controversial tweets.

Just a month and a half ago, she expressed concern for the wellbeing of princesses in the UAE. She retweeted on 21 February a BBC report about Princess Latifa, the daughter of Dubai's ruler who appeared in a video in which she said she had been held against her will since an attempt to escape in 2018.

Bassem Awadallah was among a group of high-ranking figures who, according to state media, were arrested by the Jordanian government on 3 April.

A former investment banker, Mr Awadallah has close links with the royal family.

In several senior posts, Mr Awadallah advised the government and King Abdullah on economic policy in the 1990s and early 2000s.

In 2007, he was appointed head of the Royal Hashemite Court – a top body that helps the king govern. He held that position for a year, before resigning, for unknown reasons, in 2008.

In recent years, Mr Awadallah is reported to have worked as a consultant for Saudi Arabian Crown Prince Mohammed bin Salman.

There has been speculation about Saudi Arabia's connection with the recent events surrounding Prince Hamzah.

The Jordanian government suggested there was foreign backing for an alleged coup. But Saudi Arabia has expressed solidarity with the Jordanian king.

Little is known about Sharif Hassan bin Zaid, who is reportedly a member of the Jordanian royal family.

He was named, along with Mr Awadallah, as one of the people arrested on 3 April.